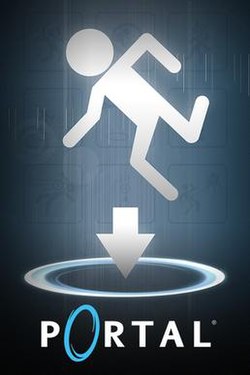 One of the smartest video  games I’ve ever played, and still top-of-the-line ten years after it was first released.

Okay, I’ll admit it: maybe I am a little late to jump on the Portal bandwagon. But it’s been so heartily recommended by so many gamers and geeks, and even has a widespread meme to its name, one that still gets quoted to this day. Of course, I’m referring to the timeless phrase: “The cake is a lie!”

I used to game a lot, mostly on the Wii, where I played retro RPG games like Chrono Trigger and new(ish) platformers or adventure games like Super Mario Galaxy and The Legend of Zelda: Twilight Princess. (Look, I said ‘newish’, okay? Yeah, I’m not super up to date with games, as you can probably tell…) I was even a big Minecraft enthusiast for a couple of years.

Maybe it’s that I’ve had so much more school recently. Maybe games have just lost their attraction for me. I used to tell my dad that when I was grown up, I’d play as many games as I liked, for just as many hours as I wanted (woo, life goals…) But then I began to find most games, well, boring. And maybe that’s not such a bad thing. I mean, I used to play all the time, as much as I was allowed, and wish I could play more.

But Portal sparked my interest again. Portal is a puzzle game, but not just any puzzle game. It’s got a super cool sci-fi aesthetic, a sarcastic (evil) robotic voice as your only companion (except, of course, for your dear Weighted Companion Cube), and gives you the ability to fire space-bending portals out of an experimental portal gun. You can travel to places impossible to reach otherwise, or fling yourself through the portals, using your momentum to fly over barriers or across pools of chemical waste.

The story is simple: You wake up in a scientific lab (the Enrichment Center), and are thrust out by GLaDOS, a fairly malicious and purposefully misleading AI, into a series of testing chambers. You must complete the chamber puzzles using the experimental Aperture Science Portal Gun, testing its abilities, and your own, along the way. If you finish the tests without being electrocuted, crushed, shot, or drowned in toxic waste, you have the exciting prospect of cake at the end of the journey.

Portal is a lonely game. I found myself longing for the metallic sounds of GLaDOS’s synthesized voice during the long silences in the testing chambers. Even my dear Companion Cube couldn’t quite comfort me, I was so alone. And, unfortunately, I had to euthanize it. Sorry, buddy.

Oh, and, the cake is a lie, by the way. I thought you should know…

Final Rating: 5 out of 5 stars

“This was a triumph. I’m making a note here: Huge success!”

(If you get that reference, you are awesome, and have probably already played this amazing game, so you don’t need a review to tell you how amazing it is)

I Say: Probably 10+ Some puzzles are difficult and require good hand-eye coordination/timing skills, and there is a bit of violence (If you get shot by a turret, there will be blood spatters on the walls behind you)

Also, the Companion Cube is people.

And if you get that reference, you are awesome times ten. 😛

Channillo.com is having a special on all their subscription packages. Through the end of February, you can get the first month of any plan for just 99 cents. How cool is that? You can head over to http://www.channillo.com/memberships/ and enter the code CHAN99 at checkout to get your first month of any plan for just 99 cents. You can subscribe to my series and read the first installment on February 11th, TOMORROW(!), and check out some of the other stuff on there. There are a ton of other authors using this platform, and you might just find something super cool to enjoy! #Not$ponsoredinAnyWay #JustWantedToTellUCauseItsCool

Plus, did you know that you can now add your name to my email list to receive news and updates delivered right to your inbox? Click here to sign up! Emails will be infrequent, so you don’t have to worry about clutter in your inbox.