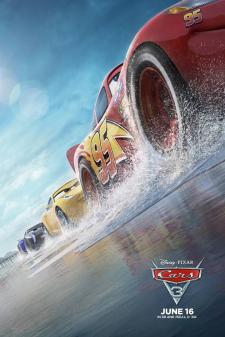 Sweet, but lacking the heart of its predecessor.

I never actually meant to see this movie. I expected it to be rather awful, considering the bizarre mess that was Cars 2. (Interestingly enough, I originally enjoyed Cars 2 back when I first saw it, but I was a small, deluded child at the time, so… never mind.) But then Cars 3 turned out to be playing in our local theater, and my dad decided to take me and my brothers on a Saturday afternoon.

I had actually seen several of my Twitter friends saying that this movie was (surprisingly) good, so I was pleasantly surprised and pleased to find out that they were right! Unfortunately, while being enjoyable and sweet, the plot of Cars 3 is a little predictable, and I just found it lacking in the emotional connection of the first Cars film. I really feel that if Pixar had just concentrated their energies on making this movie instead of the crazy second Cars, it might have turned out even better. As it stands, this movie is fun, but rather forgettable in the end, and, ultimately, just one more sequel in a long line of sequels that don’t quite live up to the original.

Thank you for reading my little review. See you next time!

One thought on “Movie Review: Cars 3”