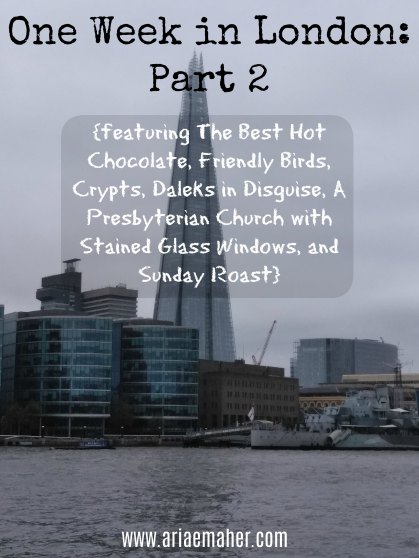 My mom had to awaken me on Saturday morning so that we could get up, get dressed, and get out of the flat in time to fit in all of our itinerary, which included going over to Upton Park to visit the Who Shop. But more on that later. First, we had a lovely breakfast at a little cafe in Battersea called Caffettino’s.

Normally, I’m a little iffy about breakfast. I have to eat something, but unfortunately I often feel sick in the mornings, so it’s all I can do to get down a bit of toast or some yogurt. I was still feeling a little sick from the jet lag, but fortunately I was able to eat a croissant and drink a lovely cup of hot chocolate. For some reason, the hot chocolate in England is about ten times better than the stuff you find in America. It’s much less sweet, for one thing, so you can actually taste the chocolate part, and not just a lot of sugar. I had a lot of good hot chocolate while I was in England, but the best by far was the stuff at Caffettino’s. If you’re ever in the area, make sure you stop in there and try it!

After our light breakfast, we were off to visit the Tower of London.

Unfortunately, part of the tower was covered in scaffolding, as were many landmarks we saw later —including Big Ben and the Houses of Parliament— so that restoration could be done. But we were still able to wander around the Tower and its grounds, and hear the history of the tower from a knowledgeable Beefeater (one of the ceremonial Yeomen Warders of the Tower), who took us and some other tourists on a little trip through the grounds of the Tower. By the time the tour was over, the line to see the Crown Jewels had stretched across the grounds and out through one of the gates in the inner wall, so we opted to skip what would have probably been an hour-or-more wait, and grab some lunch before heading to St. Paul’s Cathedral.

We picked up sandwiches at a small shop next to the river, and sat down under the canopy to eat, where were were promptly canvassed for crumbs by a variety of birds. The birds of London have a habit of turning up in extremely odd places —inside of Paddington Station, for example. They are also fairly friendly, probably because they are around people all the time, and one tiny fellow actually leapt into the air in order to grab a piece of bread out of my hand.

St. Paul’s Cathedral was even bigger and more beautiful than I had imagined. On one side, there was a beautiful garden with fountains and statues, and we wandered around in there a bit before we were able to find the entrance, which was on the other side of the Cathedral entirely. There was a massive queue, and we had just resigned ourselves to another long wait when a woman came around, asking if anyone had the London Pass. We had each gotten a London Pass for our trip, as it provided prepaid and Fast Track access to a lot of the sights in London, for a lot less money than you would spend on individual tickets. It basically saved us that afternoon; if we’d had to wait in line, we wouldn’t have been able to get to the rest of our itinerary on time.

The inside of the Cathedral was absolutely stunning. There was the sort of deep hush you only get inside a church, and many people sat quietly in pews, contemplating the vaulted ceilings and many sculptures and statues that lined the walls. We saw one sculpture of Samuel Johnson, dressed in a Roman toga, with an indescribably hilarious, self-assured sort of expression on his face. I wish I could have gotten a photo, but there was a very strict ‘no photography’ policy in place at the Cathedral, so you will have to use your imagination. We went down into the crypt, which was full of many more ancient sculptures and statues, including some that had survived the Fire of London in 1666, and we also went up a little way to the second level, inside the dome. I would have liked to go all the way up, but it was such a long climb and there were no elevators, so we decided not to.

As we were at last looking for the exit, an invisible organ began to play somewhere in the Cathedral. The acoustics were magnificent; we could hear the piece beautifully from anywhere in the church, but we could not find the mysterious organ anywhere. At last, we emerged, slightly dazzled and very footsore, ready to take the tube to our final destination of the day.

One of the statues in the garden outside St. Paul’s

We took a half-hour Tube ride out to Upton Park Station, quite a bit further from Central London than we’d been yet. We were looking for the Who Shop, a one-of-a-kind store for all things Doctor Who, with a special museum in the back containing original props and costumes from Doctor Who and other sci-fi shows. What with our lack of GPS (and my continual propensity to totally bungle maps and street names), we arrived five minutes after the museum part of the shop closed for the day. It was a little disappointing, but I was able to browse the plethora of nerdy items and books, and took home a sonic screwdriver and an awesome poster, as well as a photo with this lovely Dalek dressed up in the Fourth Doctor’s signature hat and crazy-colored scarf: 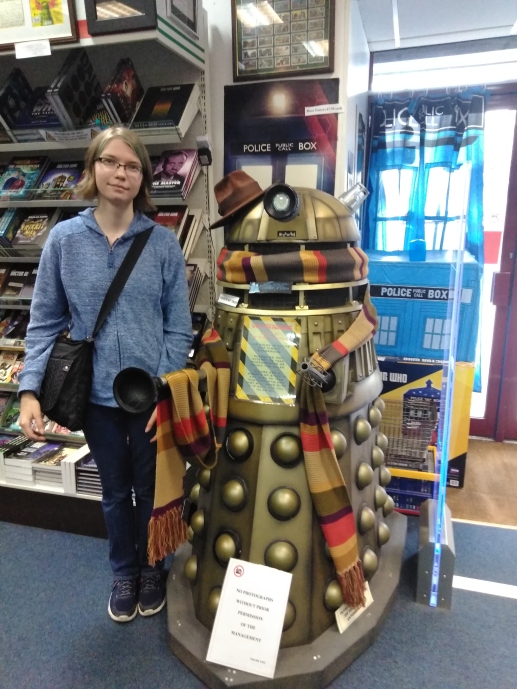 Mom had been able to find a Presbyterian Church, quite close to St. Paul’s, that seemed pretty doctrinaly sound, so we put on our Sunday clothes and took the Tube to Mansion House Station. It wasn’t too difficult to find the church. It was housed in a beautiful old Anglican building, complete with stained glass windows and a little gilded dome. The pastor was away that Sunday, so one of the elders preached a sermon about the ‘sin of silence’; how if Christians stay silent or help cover up the evil deeds of others, they are participating in those evil deeds. It was a spectacular sermon, and I’m very glad we were able to visit that lovely little church while we were there.

During some of our previous walks through this area of London, I’d noticed a sort of restaurant chain called Prét A Mangér, which seemed to have a shop on almost every corner. We were planning to try and find a pub that served traditional Sunday roast, but for the moment we decided to stop in and see what kind of food they had at Prét, instead of wandering around trying to find a pub.. Prét turned out to be a lovely little shop filled with delicious ready-to-eat food, and we had a light lunch there, deciding to get Sunday roast for dinner instead. If you’re ever in London, make sure you stop in at a Prét. Their food is really good, and, honestly, it’s one of the things I miss the most now that I’m back in the US.

After lunch, it was time for another walking expedition to find a strangely shaped glass building; we were going up the Shard, the tallest building in the UK, to take in the view of London.

This glass building was a tad easier to find than the Walkie-Talkie, as it was a fairly straight route from where we were, and we could usually see it peaking up above even the tallest buildings. Mom had also saved several of the day’s routes to her phone, so we weren’t entirely without help.

Although absolutely dizzying, the view from the Shard was certainly spectacular. We took an elevator straight up, over 60 floors into the sky, and looked out through a couple inches of glass at the city spread out below. I mustered up the courage to take the extra flight of stairs up to the open air viewing deck on Floor 72. It wasn’t totally open —the glass walls went high enough that it wasn’t like you were going to fall off the building by accident— but it was definitely windy and definitely cold, and I didn’t spend too much longer in that precarious position.

After we descended from the skies, we got a little lost on our way to our bus stop. Mom had the route saved to her phone, but we couldn’t seem to find the right street anywhere. After wandering around for a while on tired feet and achy legs in the vicinity of London Bridge, we finally found our way to the bus stop and took a long ride back to our flat. We still didn’t know what to do about the Sunday roast, but before we tackled that problem, we were at least going to rest for a while.

We were able to put our sore feet up for a while, and the landlady was able to recommend a good pub at which to get Sunday roast, so it wasn’t long before we headed out once again for a hearty dinner of roast beef, potatoes, carrots, cabbage, and an enormous Yorkshire pudding. 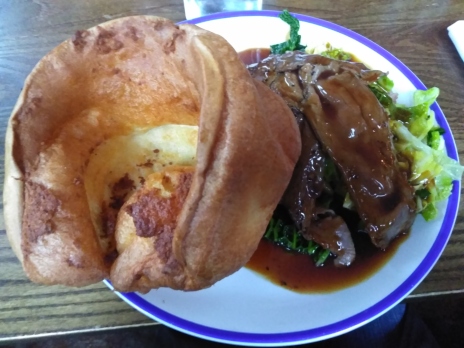 Before turning in, we went for a little stroll in Battersea Park, just as night was falling. Tired and footsore as we were, it was very enjoyable to walk under the enormous swaying trees and through the beautiful sub tropical garden. I had felt quite homesick the day before —almost wishing that the trip could be over— but now I felt totally at home.

I hope you enjoyed Part 2 of my adventures in London! Sorry this one’s a bit late. I had some evaluation tests this week, and it was also my birthday on the 24th, so I’ve been a bit busy, but I’ll try to get Part 3 done very soon. Thank you for your patience!