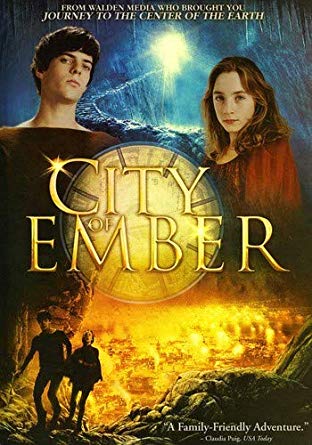 It is a rare thing for a movie based on a book to be ‘acceptable’, much less ‘good’. But, to me anyway, City of Ember is one of those movies.

Based on the young adult novel of (almost) the same name, City of Ember is a masterclass in making a world come to life on film. The design of the sets, costumes, and props are a joy to look at, and do most of the leg work when it comes to the world-building in this film—no lengthy expository dialogue required. While the movie does not mirror the story of the book exactly, there are wonderful little shots and moments here and there that seem to have leapt directly from the pages of The City of Ember and into real life. In a time when films are filled with buckets of CGI, the amount of loving care and attention to detail in this 2008 movie is wonderfully refreshing.

But I’m getting ahead of myself. Just what is this movie even about, and why have I broken my months’ long unofficial hiatus to talk about it?

It seems that somewhere along the way, I have forgotten about the true joys of reading and watching films—of experiencing stories—and also forgotten all the wonderful stories I used to love. In an endeavor to return to those stories and rediscover what I loved about them, I’ve been working my way through some of the stacks of novels with twelve-year-old protagonists that I used to devour as a child. Honestly, I think I relate more to these precocious kids than to any dour and moody teenage anti-hero of today’s YA stories. Though Lina and Doon, the protagonists of The City of Ember, have been aged up a bit in the film, it works decently well, and there’s not even a hint of dumb forced romance, thank goodness. But anyway, I love The City of Ember and (two) of its sequels, and I love the film, so I decided to revisit them. And I have some Thoughts.

City of Ember takes place in the titular city, a dying beacon of hope that is the ‘only light in a dark world’. Beyond the reaches of the city’s electric lamps, the darkness goes on forever in all directions; or at least, no one’s ever found an end to it. Confined in their city without movable lights, the citizens of Ember have been content to live as they’ve always lived for the past two hundred years. But now, everything is breaking down. The ancient generator is dying, and nobody knows how to fix it. The storerooms are running out of canned food and clothing and light bulbs.

As I mentioned at the beginning of this post, the film does a stunning job at bringing the crumbling city of Ember to life. The school and the houses and various shops and buildings really feel as if they’ve been used and inhabited for two hundred years. Everything has a patched, faded, reused look to it, but unlike the severely color-graded, washed out films we often see today, every object’s true colors are allowed to shine through; the electric lights fill the city with a warm yellow glow during the day, Lina’s red cape is worn and faded but still beautiful, the dirty orange jumpsuits of the Pipeworks laborers stands out in their gray surroundings. I feel like if this film had been made today, it would have had the life color-graded out of it. Ember is still full of life and light, even as it is beginning to fade and die out.

The costumes of the main characters all have delightful little details that give them a handmade, hand-me-down look: Lina’s colorful sweaters all have hand stitching around the neckline, as do Doon’s shirts, as if they’ve been passed down and modified for a new wearer. Lina’s red messenger cape seems to have lost its original ties, and now laces up the sides with twine in two different patterns. With a myriad little details like these, Ember is solidly established as a place with limited resources, which has been recycling its clothing and broken down washing machines and brittle old pipes for years in order to keep going. I really don’t think that you see this level of care and character in the set designs, costume designs, and prop designs many modern, even high budget, movies.

Let’s talk for a minute about a specific prop design and how it is used in the film to subtly flesh out the world. In the book, there is no sort of movable light source whatsoever, but in the movie, several characters use headlamps throughout the story. However, whenever the headlamps are in use, we are either shown a character plugging the headlamp’s chord into a socket, or shown the lamp already plugged in. Without a single line of dialogue, this little detail helps to establish the rules of the world; all the electricity comes from the generator, and in order to access it you must have a cord. So the citizens of Ember don’t have any way to explore the outer darkness beyond the extent of their fixed floodlights and the reach of the cords on their headlamps. This fact is never verbally explained in dialogue, but if you’re paying attention to the film there’s no way you’re going to walk away wondering “why couldn’t they just use a flashlight or something to explore beyond the edges of the city?” That is some exemplary world-building that more modern films should take note of.

Of course, City of Ember is far from perfect. A lot of the character development in the book was sacrificed in order to fit the whole plot into a 90 minute movie, which means we miss out on Doon’s arc of discovering how destructive his anger and frustration can be, and Lina’s wrestling with some of her more selfish impulses. These two main characters have also been flattened out a bit; in the book Lina is a more imaginative and dreamy character, who also has a lot of common sense, while Doon is very intellectual and matter of fact, but tends to be idealistic and prone to anger when things don’t go his way. In the film, Lina is bright and chipper, and loves working as a messenger. Doon is just serious most of the time, and sometimes frustrated. And that’s about the extent of their personalities. This doesn’t ruin the film, obviously, but the characters tend to be much more two dimensional than they were in the book, and the film focuses more heavily on the plot and world-building than it does on the characters themselves.

If you have never read The City of Ember, I would highly recommend it. The story is laced with Christian themes and beautiful character development, which is simple on the surface, but gives you a lot of food for thought. One of the things I love about the book is that, besides the central mystery of “how do we save or escape from Ember?”, the questions raised in the story aren’t so cut and dried: what do you do when the powers that be are clearly corrupt and couldn’t care less what happens to the people under them, or when your friend is stealing food and supplies that ‘no one will miss’? There are no easy answers to these sorts of questions, and The City of Ember never pretends that there is. The film touches on some of these ideas, but its true strength is in making the world of Ember strikingly alive, giving you  a window into the citizens’ lives as if Ember was a real place, providing a lovely experience where all the little details mesh together into a living, breathing whole.

From what I could tell by looking around online a bit, this film was considered pretty mediocre when it came out. And no, it’s not a wonder of cinema by any means. Plenty of films have better dialogue, better character development, more and better CGI. But City of Ember has a heart to it, a magic spark that lights the whole film like a light bulb. I couldn’t find any behind-the-scenes info on the film, but I think somebody must have cared a whole lot about bringing this story and these characters and their world to life. And that’s the sort of spirit we could use a little more of in this age of technically brilliant—but soulless—blockbuster films.

Final Rating: 4 out of 5 stars

“The only light in world of grayed out color-grades.”

Thanks for reading my little review of this Forgotten Film! Have you read The City of Ember or watched the movie? Got any favorite forgotten films? I’d love to chat in the comments below!